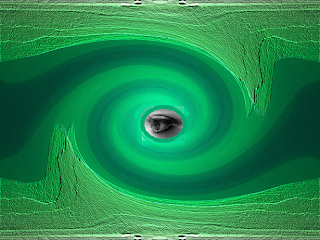 Once upon a little while she wanted to make a difference.  She pulled and tugged at her hair for crazy was she indeed. Tearing down tearing out she lives another day. Her eyes burning dry, wishing she had another route.  Her madness seeping through her pores, contaminating near and far.

She doesn't wish to ruin lives; it’s just her taint that spreads, like glass on a river sinking that waits with sharp edge.

What must happen? What can she do to change the tides of chaos when she is the chaos?

To be the love that emits from being to being, to be the fodder that nourishes you that floats out connecting each essence as one, that is what she craves deep in her folds.

What is this she speaks of when madness is within her? She looks out eyes so dry not knowing she is doomed before she begins. She tears and shreds, destruction what she does best, for the new to push through. She is not the flower she is the lightening that crashes down through a forest to cleanse it of debris.

She screams of things that cannot be changed, her fate sealed the day she was born from the darkness. She lets her sorrow beat down upon the earth as she does the only thing she knows how, destroy what has been created making way for others to be creators. She screams at the ache deep within that will never abate and then fades away until her madness is torn from her once again.

Destruction must happen to bring new life and she is the destruction.

You will clear the way from all that stands to allow light in.  Allow the light to shine into your being; your being willed grows to its new heights of love.  She will stand by and watch from a place deep in the darkness wanting to but not being able to stop your ascendance to heaven within the Divine. You, who shine so bright, are so bright, you are the light within everything that is.

She stands by unable to be that light. She screams and rages. You take pity but know there isn’t anything you can do because she lives in a prison of her own making. She chose to be that which can destroy but cannot bring life. She moves back into the dark, allowing the light to reign once again. A tear falls down and a flower grows.
Posted by Morgan Dragonwillow at 4:15 PM