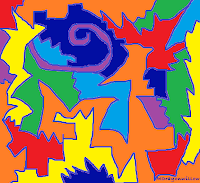 Hmmmm.... In my world vices are shadow aspects manifesting themselves in physical form. I would have to say my vice is food.  I have noticed this year that I have been reaching for my comfort foods more and more and yes my weight has increased because of it.  Luckily I am tall and it isn't completely out of control, yet.

Other vices/shadow aspects would be a bit of an obsession with Facebook. Love when I post something that gets noticed, but then who doesn't.

I actually have a bit of an obsessive personality, I can be like a dog with a bone when I am working on a project.

I know that I have lots of shadow running through my life but not all of them are technically vices.

I guess that about sums it up.  I have never liked drugs (always thought I would be the one to have my heart just up and stop, plus I really like to be in control and I value my brain), never been much of a drinker (I had stomach issues as a child and when I saw my friends drinking and puking I thought heck no, no way), I love sex as much as the next person but it hasn't ever been something that I medicated myself with.  So yeah, that is it for me.

What have you had trouble with this year?

P.S. I have been doing a lot of writing and I did something different today that I want to share. I am going to call it musical writing. I threw in a huge mix of music in my media player, shuffled them and began to listen as I wrote.  I then thought how I wasn't getting much exercise because of all the writing. I decided when a fast song came on that was making me move a little to it, to stand up and dance, move and shake for the whole song. I then sat back down and continued writing. So instead of Musical Chairs, you have Musical Writing. :D Let me know if you try it and how it works for you.
Posted by Morgan Dragonwillow at 10:27 PM